I have been threatening to start this blog for months, but have finally decided to get started. Today's subject is Broadway's Henry Miller's Theatre. I started thinking about this great old house when the NYT crossword puzzle obliquely referenced it on 1/30/09. The clue was "1980s Big Apple nightclub with a chemical name." The answer was: Xenon, which was a 1980s discotheque which started life many years ago as Henry Miller's Theatre. 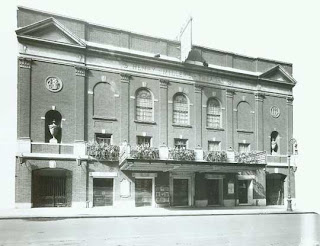 Henry Miller's Theatre was constructed in 1918 at 124 West 43rd Street as part of the theatre construction boom, when it seemed every actor-manager needed to have his own personal showplace. For many years this lovely theatre, with its elegant Georgian facade, was considered one of the most beautiful playhouses in NYC. Just above is a view of the exterior from 1927.

The two balcony auditorium was quite intimate with only 404 of its 950 seats in the orchestra. Here's a look at the interior proscenium, also circa 1927. 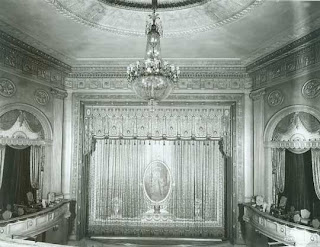 The theatre played host to many hits in its heyday, among them:
As Times Square deteriorated in the 1970s, so did the fare on West 43rd Street and despite the outrage of the theatrical community, pornographic films became standard at the newly christened Avon-on-the-Hudson for over 5 years. In 1978, following a 2 million dollar "restoration," the theatre reopened in 1978 as Xenon, a discotheque intended to give Studio 54 (also a transformed former playhouse) a run for its money. Following the close of Xenon, the house fell into decrepitude and sat idle, until it returned to legitimate use as The Kit Kat Club in 1998, borrowing its new moniker from the grimy production of Cabaret which settled in for what should have been a long run. Eight months later the collapse of a construction hoist on West 43rd Street blocked access to the theatre; with no other venue readily available, Cabaret was moved to (of all places) that other former playhouse turned discotheque, Studio 54, where it did great business until 2004. 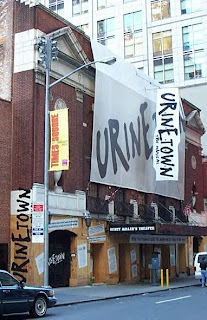 Poor Henry Miller's Theatre sat dark once more until the even grimier Urinetown transferred in from Off-Broadway in September 2001. Unfortunately, that popular show had to be evicted in January 2004 because of pre-existing arrangements to destroy the theatre and erect a 54-story Bank of America Tower. Interestingly, the Georgian facade was protected by landmark status and though the insides have indeed been gutted, the developer was bound by state regulations to keep the space a working theatre. So hopefully, later this year, construction will be complete, Henry Miller's Theatre will reopen (under the auspices of The Roundabout Theatre Company) and Broadway will have one more legitimate theatre on its roster. 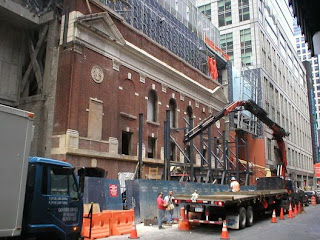 Here's a view of the construction in 2008. It's somewhat jarring to see a glass and chrome skyscraper sitting atop an old playhouse, but I'm glad they didn't demolish the entire structure.

Let me be the first to congratulate you on your theatre blog.

Sight unseen, you have a follower.

I wondered how long it would be before you started this up.

As I have told you many times before, I always enjoy your commentary on the thea-tuh.

From one First Nighter to another.

"You should get a medal or be even made a knight!"

I am thrilled to see you are a man of your word. I will check in often.

Thanks Bill from NJ for mentioning this over at Rex's site. Really enjoy your posts there, Greene, and am happy to see you start this new venture. Best of luck with it! JannieB

Congrats from me, too... Looking forward to more!