Just a quick post today. I'm busy studying the new studio recording of Rodgers and Hammerstein's 1947 musical Allegro these days. There's a lot to absorb and I'm not ready to post a review just yet.

Instead let me say a word about one of my favorite vocalists, the amazing Barbara Cook. She is simply the finest theatre vocalist/actress I have ever come across. She has the most amazing, silvery soprano voice; but more important than her instrument, is how she uses it. Her song interpretations are peerless and infused with such incredible wit, warmth, and intelligence as to make almost everything she does definitive. Consider her remarkable "Losing My Mind" from the 1985 New York Philharmonic concert version of Stephen Sondheim's Follies. I had long thought that original Sally Durant, Dorothy Collins, was unassailable in this role, but Cook gives her a real run for her money and even has it over her in vocal production. Take a listen, it's breathtaking. This one is for you Sarah dear...

Here's a bit of the documentary about the making of that Follies concert which caps with Cook performing a stunning "In Buddy's Eyes." I realize now that all these keys have been raised from the originals, which only adds to the dramatic tension. Watch for the late Lee Remick and a very young Mandy Patinkin on the sidelines watching Barbara rehearse.

Cook really came into her own starring as Marion the librarian in The Music Man back in 1957. She went into this show straight from her ear popping success as Cunegonde in Bernstein's Candide (1956). There she had stunned audiences with her coloratura prowess and repeated high E-flats in "Glitter and Be Gay." Alas, there is no video of her work there or in The Music Man for that matter. Where are those Ed Sullivan clips when I need them? I did manage to find this somewhat cheesy video of her singing "Til There Was You" on The Bell Television Hour. The set dressing positively reeks of the 1960s and don't get me started on her costume, but Cook is "young and beautiful" as Sally would say and in splendid voice to boot. To see the clip click here. 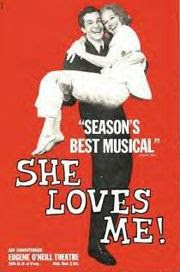 Another of Cook's best roles was the ingenue, pen-pal Amalia Balash in She Loves Me! in 1963. I think this may have been her greatest role ever. The story is sweet, the production was heavenly, and the score was achingly beautiful. Cook had the lion's share of the best numbers and scored heavily with "No More Candy," "Will He Like Me?" (one of my all time favorites), "I Don't Know His Name," "Dear Friend," and even "Where's My Shoe?" The show was intimate and quiet in a season dominated by musicals celebrating the loud and the brash (Hello, Dolly! and Funny Girl). I think poor She Loves Me! might have gotten a little lost amidst all the hullabaloo and Cook wasn't even nominated that season! Like most aficionados, I treasure the original cast recording. I should probably mention that She Loves Me! had direction by Hal Prince and choreography by Carol Haney (see yesterday's post on The Pajama Game which celebrates their theatrical contributions).

Anyway, here's Barbara concertizing with her big second act showstopper "Vanilla Ice Cream" which has become one of her signature songs. Even this late in her career she can still thrill with that high B at the end of the song. This song gets a lot of coverage by teenage girls at my daughter's thespian competitions.

Switching back to the young Cook, here's another television clip from The Bell Telephone Hour in 1965 (she was on this show a lot). This time she's paired with Anita Gillette (remember Anita? She did a lot of theatre back in the 1960s) doing some favorite WWII songs from the 1940s.

And finally, here's Cook in revivalist mode performing that old standard "Ac-cen-tchu-ate the Positive" by Johnny Mercer and Harold Arlen. What a voice! Now, if we could just get her back in a show somehow...

Alfie, you have outdone yourself!
She Loves Me is a Christmas tradition in this house, so we have listened again to it recently. And Barbara Cook has long been in our personal pantheon.
As you may well know, Losing My Mind stops me in my tracks "not going left, not going right."
Do I detect Elaine Stritch with the cigarette hanging from her mouth behind Barbara as she rehearses In Buddy's Eyes?
Your silly goose,
Sarah

@Fikink: Wow! You have a great eye. That is indeed Elaine Stritch hanging out with a cig in the background. All she needs is a vodka stinger in the other hand and the picture would be complete. She gave one of the slowest renditions of "Broadway Baby" that I have ever heard during this concert, but she got an ovation on just about every line.

Barbara Cook is indeed fantastic. Those clips are amazing, especially the '65 BTH song. "Follies" is a favorite of mine. I love "I'm Still Here," and have worked up "Buddy's Blues" as an audition piece, but I've never used it.

@Jeff in chicago: I wish there were more available video of Barbara in her prime years, 1950s through 1960s. She remains a stellar vocalist, but age does exact a toll on the voice. Fortunately, she is well represented on disc, with just about all her Broadway shows receiving cast albums. Almost anything she sings in Candide is amazing and I highly recommend "Magic Moment" from The Gay Life too.

Thanks Geoff - that is beautiful stuff. Only Sondheim could create such a stunningly gorgeous song like "In Buddy's Eyes" with it's incredible level of irony. Loved seeing Lee Remick - first woman I ever fell in love with (I was 11) when I saw "The Hallelujah Trail" on the big screen in NYC with my folks. Of course I also thought that Donald Pleasance was the funniest man in the world based on that film too.

@imsdave: Amen on Sondheim. I love Lee Remick in Days of Wine and Roses.

That's funny - Days of Wine and Roses is the first thing I think of when I think of Lee Remick.

@fikink: That's not funny at all. You and I always think the same thing (even when it's the wrong thing.

I was nine when 'Days of Wine and Roses' came out, so I didn't see it until the days of video tape. I could have fallen hopelessly in love two years earlier! Of course by that time, who do you think I thought was the most beautiful woman in the world...???

I think the correct answer here is your wife (assuming you're referring to the days when videotape became widely available) -- or at least that should be your answer :)

Thought you might enjoy the poem that the title was derived from:

@greene - a bit too PC for me. My wife is certainly a lovely person, but we're talking lust here

@fikink - Margaret Thatcher (just kidding). Grace Kelly (circa the year of my birth).