I'm taking my cue once again from the NYT crossword puzzle; this time the Sunday puzzle of 2/8/09 in which Pajama Party served as a theme. This, of course, puts me in mind of The Pajama Game, the musical comedy based on Richard Bissell's novel 7-1/2 Cents. The show had the unusual hook in that it treated labor relations in a Midwestern pajama factory, where management refuses to grant the raise that has been sweeping the industry.

The show opened May 13, 1954 and played for 1063 performances, a very imposing run back in the 1950s. The book was co-written by director George Abbott along with novelist Richard Bissell. Jerome Robbins, looking to move out of choreography, co-directed the show with Abbott with the understanding he would oversee the dances being staged by newcomer Bob Fosse, who needed no help at all thank you very much. The show also marked the producing debut of former Abbott stage manager Hal Prince who, along with fellow stage manager Robert E. Griffith and money man Robert Brisson, was looking to expand his theatrical horizons. The score was by the talented team of Richard Adler and Jerry Ross who had only been heard on Broadway with songs for John Murray Anderson's Almanac in 1953.

So the show is already good, literally dripping with talent in the creative department. I'm always astonished when I see the names of big Broadway theatrical legends attached to such standard commercial fare, but that's probably why these commercial confections still resonate with contemporary audiences. These creators lavished as much care and attention on their commercial trifles as they did on their greater artistic achievements.

The talent pool expanded considerably with the casting of the show. The comic factory efficiency expert (Vernon Hines) was played by former vaudeville crazy Eddie Foy, Jr. who was paired with the manager's secretary (Gladys), cast with the wonderfully daffy Carol Haney. The primary lovers were Sid Sorokin (John Raitt), the new factory superintendent, obviously on management's side, and Babe Williams (Janis Paige), on labor's: so it's a sort of a capitalistic Iowan Romeo and Juliet. There is little more to the plot than that Sid at length gets Gladys drunk, steals her key to the factory's account book, and discovers that the crooked manager has budgeted the raise without actually granting it. The union wins and both couples unite.

Oddly, with little story to work with, the book is uniformly excellent, very fast paced and amusing yet aptly sharp on character interaction. The score is likewise quite good and features an unBroadwaylike "top forty" sound in such varied numbers as "Hernando's Hideaway," "Once a Year Day," and the country-western flavored "There Once Was a Man." When had Broadway heard anything like this music? It is not widely acknowledged, but Frank Loesser actually wrote two of Pajama Game's songs: the oddly chromatic "A New Town is a Blue Town" (sounds a bit like "My Time of Day" from Guys and Dolls, no?) and yes, that hillbilly rouser "There Once Was a Man." 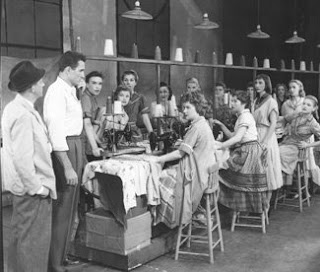 Leading man John Raitt later confirmed that the two songs had been written by Loesser and also, surprisingly, confessed that George Abbott had not been pleased with his own casting. After auditioning for The Pajama Game, Raitt learned "George Abbott didn't like the way I read. They tried a number of people, including Van Johnson and Darren McGavin. One Saturday, I got a call from my agent: 'They're desperate. They want to see you at the Winter Garden, following the matinee of Wonderful Town.' The first time, I'd auditioned with the third assistant stage manager; we did the kitchen scene. This time, they gave me a beautiful gal to play opposite. I was signed -- but not to a run-of-the-play contract. They still didn't have confidence in me. That worked in my favor: In New Haven, when I did get a run-of-the-play contract, I got a little more money." 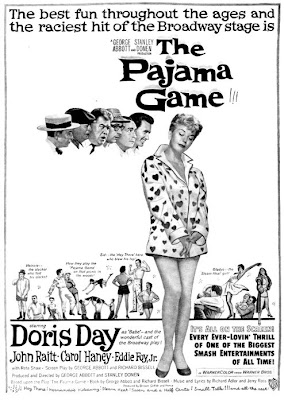 There was an extremely faithful film adaption, again directed by Abbott, which was released in 1957. The film features almost all the members of the original Broadway company except replacement Doris Day, who filled in for Janice Paige, and provided some good old-fashioned Hollywood casting insurance. Day is actually quite good in the role and is a considerably better singer than Paige, so the altered casting is actually quite welcome. The film itself is lacking in any sort of cinematic sweep and often looks like a filmed play, but who really cares? This is about as close as any modern viewer is likely to get to what this show actually felt like in the theatre back in 1954. Much of the original staging is present, including some of Bob Fosse's earliest Tony winning choreography.

Just take a look at the "Steam Heat" number from the second act featuring that pixie-like gamin Carol Haney flanked by dancers Buzz Miller and Peter Gennaro. This is one of those typical Abbott we-need-to-spice-up-this-empty-second-act numbers. It is wedged into the plot on the contrivance that it is some sort of an entertainment at a union meeting. Oh, really? Of course, it doesn't matter that the number sticks out as a dramatic sore thumb; it's just superb entertainment. And who had ever seen dance moves like this before? All the signature Fosse traits are plainly evident: the knock knees, awkward posture, limp wrists, even the hat tricks. It's all there.

Or consider "I'm Not At All in Love," one of those charm songs that Broadway used to effortlessly toss off on a regular basis. It also shares some history with the "This Can't Be Love" type songs so favored by old Broadway in which protagonists come up with all sorts of ways to deny their true romantic yearnings. It's practically a genre unto itself. To see Doris Day do the number in the film version go here. Or you can watch Kelli O'Hara do the same number in the recent Broadway Revival. Me? I'll take Doris Day any day. 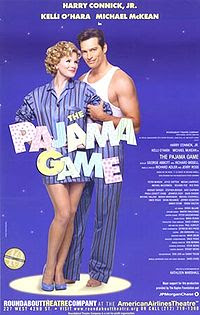 There have been two Broadway revivals of The Pajama Game. The first was an extremely short-lived and cheap looking affair that played the Lunt-Fontanne in 1973. This one was again directed by Abbott and featured a racially mixed cast with Hal Linden, Barbara McNair, and a very drunken Cab Calloway. Oddly, the racially mismatched Linden and McNair did not seem to acknowledge that their differing ethnicity might prove a barrier to their relationship. It was still only a management-versus-labor stumbling block in the romance, which just seems weird given the racial tensions of the 1970s.

The second revival was considerably better and put on by the Roundabout Theatre Company in February 2006. Kathleen Marshall provided the excellent direction and scintillating choreography while Harry Connick, Jr. made his Broadway debut as Sid opposite a very appealing Kelli O'Hara, fresh from The Light in the Piazza. There were some new songs for this staging by composer Richard Adler, but none that provided any significant competition to the original score. Connick and O'Hara garnered excellent reviews and everybody seemed to notice the palpable sexual energy between the two. You get a hint at it in this clip from the Tony Awards that year. There's also some characteristic piano riffs for Connick during the second half of the clip when they switch from "There Once Was a Man" to "Hernando's Hideaway."

I must admit to a certain fondness for all that hot hoofing as well as Mr. Connick's piano stylings, but they don't have much to do with the lyric do they? This "Hernando's Hideaway" seems anything but a hideaway. What happened to "...a dark, secluded place. A place where no one knows your face..."? I get the distinct impression that Kathleen Marshall's "Hernadno's Hideaway" is so lively a jive that it would come complete with brawling celebrities and the paparazzi. Contrast this with Bob Fosse's staging where everybody sneaks about and lurks in utter darkness striking matches. It's a more understated staging, but truer to the lyric. Plus, I just love Carol Haney.

The Pajama Game is well represented on disc. The original Broadway cast recording is still in print on Sony Records and is well worth owning chiefly because of the glorious singing voice of John Raitt, who remains unmatched in his role. The 1973 revival went unrecorded, but the 2006 revival with Connick and O'Hara is still available, although you have to purchase a second disc of Connick and O'Hara singing songs from his flop show Thou Shalt Not (2001) in order to get your hands on the Pajama Game tracks. Connick is in fine voice and uses his trademark Sinatra crooning to great effect. O'Hara is an excellent singer and is completely devoid of those pitch problems which mar Janice Paige's tracks on the original Broadway recording. There is also a very fine 1996 studio recording of the entire score from Overture through Exit Music which features Judy Kaye and Ron Raines. They seem heavy on voice and short on charm so the real star of the recording becomes the National Symphony Orchestra conducted by John Owen Edwards, which gives a flavorful and idiomatic reading of this jazzy score. You will never hear these orchestra tracks better played than on this recording.
Posted by Greene at 12:45 PM

Shirley Maclaine is worth a mention here as this was her big start in showbiz, subbing for the (supposedly) indestructible Carol Haney when she broke her ankle. Neat stuff on that on the Biography Channel.

What a treat. This show was the first musicals I had ever heard about - my parents had the album and I eventually knew all the songs by heart. Never saw it on stage, but remember the movie. At the time it debuted, names like Bob Fosse, Peter Gennaro and such were completely unknown to me. As you noted, there was an incredible pool of talent on both sides of the curtain.

As for the Harry Connick revival, he doesn't really have the vocal chops, those songs are just too big for him. But Kelli O'hara is delightful.

Another great blog, Geoff. Thanks!

@imsdave: I did consider including the Shirley MacLaine business in the post (that's one of those real Lana-Turner-down-at-Schwabs stories), but it was already running long and I wanted to keep the focus on Carol Haney. She was diagnosed with diabetes during the filming of The Pajama Game and would be dead by 1964, just shy of her 40th birthday. Carol was an amazing talent, one of those pixie-like gamins that the musical dotes on. She had worked with Bob Fosse on the film version of Kiss Me Kate and it was he that brought her to New York to work on Pajama Game. She won a very well deserved Tony for Outstanding Supporting or Featured Musical Actress as the award was called then. I am glad Abbott decided to retain her for the film instead of going with MacLaine who had already made a name for herself in Hollywood.

@JannieB: Agree that Connick can't hold a candle to Raitt in the singing department, but in the theatre he was fine. Say what you like about his singing chops, but the man had some real chemistry with Kelli O'Hara. They sizzled together!