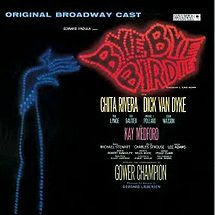 My daughter's high school is doing Bye Bye Birdie as their spring musical this year. Since Caitlin was fortunate enough to have been cast as Kim, we've spent a lot of time studying the script and score. You know, I really thought I knew this piece, but it turns out I didn't. Now that I've spent some time looking at it carefully, I'm beginning to realize what a finely crafted work this is.

I never had the opportunity to see the original production which opened on Broadway in the spring of 1960. The show was an absolute sleeper and a surprise hit, nabbing Tony Awards for Best Musical, Best Direction and Choreography (both for Gower Champion), and Best Supporting Actor (Dick Van Dyke). It's not surprising that the show was a sleeper as none of the names attached to the piece were really known to theatregoers of the era. Oh sure, Gower Champion had a reputation for his film work at MGM and from several revues he had staged for Broadway, but he had never been given the reins on a major musical before. Chita Rivera too was known to discerning playgoers for her Anita in West Side Story (1957). But Dick Van Dyke, Kay Medford, Dick Gautier, and Susan Watson were unestablished. Paul Lynde had a solid debut in New Faces of 1952, but had not been seen in New York since. I mean who were these people? So, the smart money counted this show out and producer Ed Padula had a devil of a time raising the capitalization.

The greatest surprises in the talent stack, however, turned out to be composer Charles Strouse, lyricist Lee Adams, and librettist Michael Stewart -- all first-timers with a Broadway show. One would never anticipate such expertise from newcomers but they turned in surprisingly fresh and professional work, a real course in Musical Comedy 101. The writing is by turns witty and sly as it tells its tale of generational conflict and teens writhing in angst at the prospect of losing their sacred idol; but the authors always found humor solidly grounded in character and situation. The result was a show refreshingly free of shtick and without the need to be played for camp.

I believe the work has become distorted over the years, largely because of damage from the not-so-faithful movie adaption (1963) and the more faithful, but extremely cluttered, TV version (1995). Caitlin was pretty much amused and horrified when I first showed her the film version and she saw Ann Margaret doing this:

This title song, of course, is not from the stage play and was written to order for the movie. I find it quite good in its own three-chord-pop sort of way. What is shocking, however, is the overtly provocative presentation of Ann Margaret. What high school is this character attending? Slut University? And must the camera ogle her so? Granted Ann makes for one alluring sex kitten, but Kim MacAfee? The television version got the number right, rescuing the song from the planet Tramp, and returning it to the sweet innocence one expects to see in Birdie.

Ah, that's better. These girls are adorable, if still a little long in the tooth for high schoolers. I especially love the girl in the "Birdie Sweats" who looks like she might actually be sixteen and ready to die over the loss of Conrad. The actress playing Ursula (the one in the center who starts the song) is absolutely perfect too and does a mean Conrad Birdie Scream to boot!

Perhaps one of the major reasons Birdie was such a popular success in 1960 (was there anybody who did not like this show?), was because of the memorable performers. Chita Rivera and Dick Van Dyke have since gone on to greater fame, but they were pretty unknown in 1960 and it must have been a real treat for audiences of the era to discover them. As I mentioned earlier, Van Dyke was honored with a Tony Award for Best Supporting Actor in this role. Supporting Actor you ask? Isn't he one of the leads? Well yes, but he was billed and in 1960 you had to have star billing to be considered for a Best Actor award (a situation which has happily been reversed). Chita Rivera was nominated for Best supporting Actress, but lost the award to Tammy Grimes in The Unsinkable Molly Brown. Molly Brown is a supporting role? Oh, never mind. Here's Chita doing the "Shriner's Ballet" number, which was a real showstopper in the second act.

There used to be a wonderful clip of Dick Van Dyke doing the "Put On A Happy Face" on the Ed Sullivan Show posted on You Tube. I just saw it a week or two ago, alas it's gone now; probably removed because of licensing issues. It's too bad because the number was a real charmer and the young Van Dyke was a very appealing performer who scored heavily with his rubber-limbed performance. Here's Jason Alexander doing the same number in the 1995 TV movie (unfortunately minus the Gower Champion choreography). He's a little creepy, actually...but the "sad girl" is as cute as she can be.

I'm surprised this show has never been revived on Broadway, especially since many less worthy pieces have already had a second look. I remember seeing a tour starring Tommy Tune and Ann Reinking back in 1990, but it was surprisingly limp and certainly ugly to look at. Tune's part was built up and he had a new number in the second act called "I Took A Giant Step" complete with his signature taps. It didn't add much to the show. I hear the Roundabout Theatre will get to in the fall of 2009. I hope they choose to present the piece as originally written and not give it the "revisal treatment." I think it's plenty good just as it is.
Posted by Greene at 6:10 PM

Jason Alexander???? Who knew he was a song and dance man, of sorts? Is that his own hair? Hard to tell if it's real or a toupee. I've never been a fan - I think it was because of his role in Pretty Woman - but he's somewhat charming here, and yet, a little creepy too. I never liked Seinfeld, and he was one of the main reasons why.

I wish I'd seen the original staging of this work. The book and music are amazingly clever - but in the wrong hands this play gets way too campy!

Oh, and tell Caitlin to break a leg. I'm sure she'll be wonderful.

Thanks for the good wishes. Caitlin is doing a good deal of the musical staging for the show as well, so it looks like all those times I carted her to Broadway are starting to pay off. She's got a good eye for stage pictures.

Jason Alexander actually got his start on Broadway. In retrospect, I realize I saw him in many shows, but didn't really know who he was (because he hadn't hit it big yet). I apparently saw him in the original cast of Merrily We Role Along (1981) where he played the part of the producer, although I have no recollection of him in the part. I recognize his voice on the cast album so he must have been there. The same goes for The Rink (1984), although he was much more visible in that show so I kind of remember him. I distinctly remember him in Jerome Robbin's Broadway (1989) largely because I thought he was merely adequate in the play, but received a Tony Award because it was such a dry season. I think he wrote the extremely dull continuity for that show as well. It must have gotten him noticed though because he went straight into Seinfeld from there.