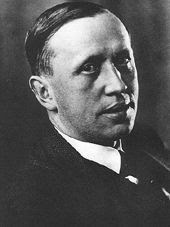 Today's blog entry comes courtesy of the 2/27/09 edition of the New York Times Crossword puzzle which referenced the satire/allegory The Insect Play by Czech writers Karel and Josef Capek. Karel Capek appears fairly regularly in the Times puzzle, usually with reference to his famous 1921 expressionistic play Rossum's Universal Robots or R.U.R. as it is frequently abbreviated. His brother Josef actually coined the term robot, but ceded it to Karel for use in his play. The brothers actually collaborated on some 20 works for the stage, the most famous of which is The Insect Play.

Also known as The Insect Comedy, The World We Live In, and From Insect Life, the play was published in its original Czech in 1921 as Ze zivota hmyzu. The play received its premiere at the National Theatre in Brno, Czechoslovakia, on March 8, 1922, running for about one hundred performances. Productions in New York (1922) and London (1923) soon followed, but the play has been performed only intermittently since that time, probably because the play requires a large cast and is exceedingly difficult to stage. 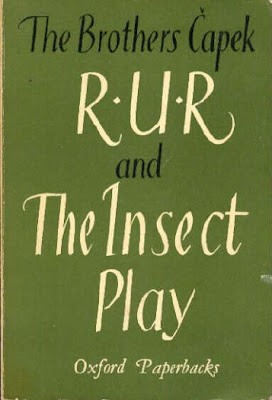 All but a few of the characters are insects which have been anthropomorphized. The authors used these insects to comment in allegorical and satiric terms on the follies of human society in post-World War I Czechoslovakia. Most critics believe that the Capeks were inspired by other animal plays and short stories, citing Jean Henri Fabré’s La vie des insects and Souvenirs entomologiques, as well as a story by Russian author Vsevolod Garsin, What Never Happened as probable sources of inspiration. The stories of The Insect Play, while alternating between the humorous and the horrific, resonated with audiences at the time despite critical carping. Over the years, however, critics have eventually found much to praise, as did Lucia Mauro of the Chicago Sun-Times, who wrote in a review of a 1999 production of the play, ‘‘their keen observations of the life cycle and poignant visions of war’s futility remain relevant to this day.’’

I've included a somewhat lengthy plot synopsis for those interested.

Prologue: In the Woods The Insect Play opens in the woods where a drunken tramp sleeps on the ground. Butterflies flit near him. His slumber is interrupted by a lepidopterist who is collecting butterflies for his scientific collection. The scientist is annoyed that the tramp’s movements have scared off the insects. After the scientist leaves to continue collecting, the tramp laments that all the world is paired off into couples.

Act I: The Butterflies 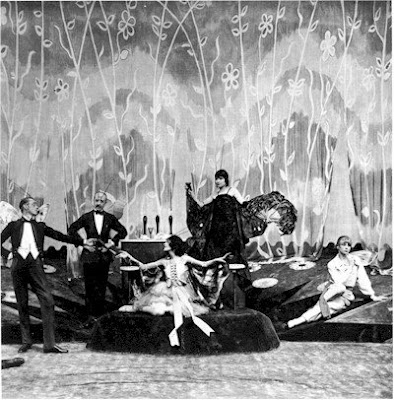 The tramp finds himself in a place that caters to butterflies. As the tramp makes himself comfortable on cushions and dozes, butterflies enter. Felix, a shy poet butterfly, is looking for Iris. She comes in, followed by another male butterfly, Victor. Answering her question, Felix tells Iris that he is not in love with any female butterflies, and has not been since he was a caterpillar. In fact, Felix loves Iris, but has only watched her from a distance and written poems.

Iris flirts with Felix. Victor tries to embarrass him by reciting part of a poem that Felix has recently published about sex. Iris gets rid of Victor, and continues to toy with Felix’s feelings. She accuses him of loving Clytie, another female butter- fly. Felix admits that he is in love with Iris. She asks him to quickly compose a poem for her, which he does, much to her pleasure.
The moment is interrupted by the appearance of Clytie and Otto, a male butterfly who is chasing her. Victor also returns. Iris embarrasses Felix by quoting the poem about sex for those present. Yet Iris also calls Felix ‘‘clever’’ when she reports that he has found a rhyme for her name. A few moments later, Iris is flirting with Victor and leads him on a chase.

Clytie asks Felix why he loves Iris. Felix denies that he does. Clytie insults Iris and flirts with Felix, then asks him to be friends, ‘‘like two girls.’’ Felix recites the beginning of a new poem for her, but she is unimpressed. Clytie’s attentions turn to Otto, who begs for her love. Clytie now leads Otto away on a chase. Felix leaves alone.

The tramp feels sorry for Felix. Clytie returns to primp in the mirror. Though she does not know what a man is, Clytie tries to get the tramp to chase her. The tramp will not play her game. Clytie returns to the mirror after the rejection. Iris enters, out of breath and tells Clytie a funny story about Victor being eaten by a bird. Otto nearly met the same fate. Felix comes in and tries to read his new poem to the women. They only care about their appearance. Otto enters, and both Iris and Clytie lead him on a chase. Felix tries to get them to wait, but to no avail. The tramp calls him a fool and shoos him away.

This act takes place in a sandy hillock. The tramp is half-asleep nearby, but a chrysalis interrupts his repose. It is excited because it is about to be born. It expresses this sentiment regularly throughout the act.

The action shifts to a pair of beetles, Mr. and Mrs. Beetle. They are rolling a huge ball of dirt and dung, which they call their ‘‘capital.’’ They have worked very hard to collect the ball, and are immensely proud of it. Mr. Beetle wants to immediately begin work on their next pile. Mrs. Beetle is more concerned with protecting what they already have. Mr. Beetle goes to look for a hole in which to bury it.

While he is gone, Mrs. Beetle thinks she has found a hole in an ichneumon fly’s lair and enters. In the meantime, a strange beetle takes the unguarded capital. The tramp questions him, but does not prevent him from taking it. Mrs. Beetle returns and accuses the tramp of taking the pile. The tramp denies it and describes the beetle. Mrs. Beetle believes that it is her husband and goes looking for him.

The ichneumon fly returns with a dead cricket for his daughter, a larva. After feeding his daughter, the fly turns his attention to the tramp, asking if he is edible. The tramp says he is not, and the fly proceeds to regale him with the wonders of children.

Mr. Beetle returns looking for his wife. He has found a hole. The tramp tells him that his wife is looking for him and that another beetle stole their capital. Mr. Beetle is more concerned with the loss of it than his wife.

Mr. and Mrs. Cricket enter. They are moving into the home vacated by a cricket eaten by a bird. Mr. Cricket leaves to introduce himself to the neighbors. After he goes, Mrs. Cricket, who is pregnant, and the tramp talk about children. Mrs. Beetle returns and gets into an argument with Mrs. Cricket over what is more important: a dung pile or a home. Mrs. Beetle leaves again.

The fly returns, kills Mrs. Cricket, and takes her to his lair. A parasite enters, and sympathizes with the tramp’s horror over the murder. The parasite believes that the fly is bad because he just stores most of what he kills while others starve. The fly considers eating the parasite, but finds him inedible. When Mr. Cricket returns, the fly quickly kills him, then leaves to look for more food. After he exits, the parasite enters the lair and eats much of what is in there, including the larva. The tramp is disgusted by all the killing.

The chrysalis is growing more excited about being born. The tramp realizes he has sat on an ant heap. He asks the blind ant, who is counting time for the worker ants, what he has stumbled upon. The blind ant does not answer, but the chief engineer does. He is in the Ant Realm. A second engineer enters. He has come up with a more efficient way to count and get more work done.

The engineer ants have never heard of humans and inform the tramp that ants are the masters of the world ruled by a she. These ants have defeated the black and brown ants, conquered the grey ants, and are now trying to beat the yellow ants. They are doing this to rule the world and master time. The engineers are concerned with the speed of work.

An inventor ant enters. He has come up with a new war machine that will kill quickly. A messenger comes in. The southern army has had some men captured by the yellow ants, who have declared war on the Ant Realm. The ants call for arms as the yellow ants invade. The ants become soldiers led by the chief engineer, now the commander in chief and dictator. He organizes forces and readies the battle plan.

The messenger returns regularly with progress reports. The Ant Realm is losing badly to the yellow ants. Wounded ants return. The tide of the battle turns, and the yellow retreat. The chief engineer orders their destruction, and proclaims himself emperor. The tide changes again and it is the Ant Realm who retreats. The yellows invade and are victorious. The tramp kills the yellow leader.

The tramp is sleeping in the dead of night. Voices of all the insects can be heard as morning nears. The tramp strikes stones to make a spark, which lights up the forest. Moths come into the light and die. The chrysalis breaks open to reveal a moth, who dies soon after she is born. The tramp is upset by her death, and moments later is struggling with his own death.

After dawn, a woodcutter comes upon the corpse of the tramp. A woman with a baby finds both of them. The woodcutter covers the tramp, while the woman places a flower on his makeshift grave. Children sing as they go by on their way to school.
Posted by Greene at 4:29 PM

Nice write-up - the play is totally unknown to me but you have given me a great insight into it. RUR - crosswordese to the max.

Keep up the wonderful work.

Off to sunny FL for dad's 89th birthday (and a little golf).

I did this as part of my English literature examinations back in 1976! That too in Kenya
Imagine how political It would have been during that time
Sunil Kotecha

I had a non-speaking part as an ant in our school's production in about 1963! The play has undoubtedly had an impact on my outlook on life!

I played Mr Beetle at Peckham Girl's School (London) in about 1965. It was a great production and a wonderful experience.